Shark Fujishiro (シャーク藤代, Shāku Fujishiro?) is a member of the Seto Group.

Fujishiro is a tall, strong man with blonde hair with one long bang sticking out and hazel eyes. He has long, curved eyes brows, and his eyes are always dull, giving him a scary look. Fujishiro wears a black and gray jacket with a turtle neck and has black sweat pants with sneakers due to him being the P.E Teacher at Nagasumi's school. When he wants to eat Nagasumi, his head transforms into a shark while his human legs remain, but if he gets fully exposed to water he turns into a shark. He also has a bad habit of making every statement sound like a question, and every question sound like a statement.

Fujishiro is an impatient man who thinks the best way to end the chaos is to eat the source of the problem so that everyone can go home. He demonstrates this when he tries to eat Nagasumi multiple times but fails each time. When he is not worrying about things he is seen to just sleep the entire day. For some reason, he always speaks as if he's asking a question even when his tone should be that of a statement.

Fujishiro is initially summoned by Sun's father during the Michishio family's initial visit to the Seto family home to attack Nagasumi. In human form, he later becomes Nagasumi's P.E. teacher. 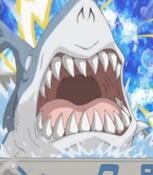 Retrieved from "https://mybrideisamermaid.fandom.com/wiki/Shark_Fujishiro?oldid=6054"
Community content is available under CC-BY-SA unless otherwise noted.