Nagasumi Michishio (満潮 永澄, Michishio Nagasumi?) is the main male protagonist and the husband of Sun Seto. In most situations, he is sometimes treated as the scapegoat/black-sheep/punching-bag by everyone around him (most noticeably by Gozaburo Seto, Maki, and Lunar Edomae).

Regardless of his main role and friendly personality, it is shown throughout the Anime Series and Manga, especially in "10 Things I Hate About You", that Nagasumi is a very unpopular student in school. This is due to the reasons that all the guys are jealous of his relationship with Sun Seto and the girls being enrage at him for starting a war between factions of Lunar and Sun.

Nagasumi is a average size boy  with black hair (with an ahoge) and blue eyes which makes him a close image resembling his Father. Nagasumi is seen wearing a his all black high school uniform but is seen wearing other outfits outside of school.

Nagasumi is a kind, calm, average and smart boy for his age who is most likely the only one in his family who has a clear head, apart from his grandmother.

When push comes to shove, Nagasumi demonstrates a great deal of inner strength and Sun Seto often uses her Song of Heroes to power Nagasumi up in battle situations, but in the case where Sun is directly threatened he is able to activate the power-up by himself. After being abused, punched, and attacked throughout the series he later becomes an expert at reading moves which allow him to dodge attacks at an inhuman rate due to Maki constantly attacking him.

He is able to sense the level of danger in a fight; this is shown when the top hair on Nagasumi's head stands up and acts like a signal tower to show a level indication of danger. This was first shown in "What's Your Name?" when, after Sun and Lunar Edomae fell into the lake, Nagasumi rushes in to prevent chimp from discovering their mermaid forms.

At the end of the series it is shown that he no longer needs to hear Sun's hero song to become stronger he manages to empower himself just by being near her.

During a Family Vacation at the Seto Inland Sea, Nagasumi nearly drowned to death until he was saved by Sun Seto. After that, he and his Family learned about the Seto Gang and the Mermaid Law, which states that upon learning their True Identity, either the Human or the Mermaid must be executed. To avoid this, it is suggested that a Marriage is the best solution. Since then, Nagasumi decided to face his fears and take on the responsibility of taking care of Sun as his wife, although it doesn't make it easy on him due to almost everyone in the Seto group (except Ren Seto (Sun's mother) and Masa) who are against their union.

As the series progresses, however, he truly falls in love with Sun. 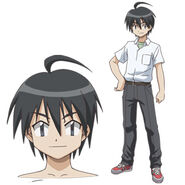 Add a photo to this gallery
Retrieved from "https://mybrideisamermaid.fandom.com/wiki/Nagasumi_Michishio?oldid=6067"
Community content is available under CC-BY-SA unless otherwise noted.