Nagasumi's mother (永澄の母, Nagasumi no Haha?) could be said to lack self-respect and lacking a firm moral base. Current events in her life have caused her interest towards her husband to gradually die out, but overall she loves her family dearly. She got jealous when her husband was caught daydreaming about being young after talking to Sun Seto.

She is often seen to hit her son when she thinks his imagination is going wild until she sees he was right. She does not put much effort in being a mother often blaming her son for not being good, without doing anything to help him out. This was proven throughout Episode 12 and Episode 13 in which, after being told that Nagasumi was caught seemingly fondling Lunar's nude butt (in which in actuality he was just drying her Mermaid tail with a towel), she and her husband didn't stand up for their son not once throughout the entire plot. Despite that she does love for him, such as being worried when Sun's father nearly killed her son, showing she does love him. She also greatly enjoys having Sun and Lunar living with them, treating them like family as well as the "daughters" she never had.

Her personality can be a bit irritating, and she's not the best wife out there, her over caring attitude towards Masa often gives her husband headache, but she doesn't seem to care about this.

Nagasumi's Mother is an average height woman and is quite skinny. She has light brown and Gray eyes she is mostly seen wearing a purple shirt with a yellow apron on her upper body while wearing a red skirt and purple shoes for her Lower. Although throughout the series she has been seen wearing different outfits bit this being her most commonly seen. 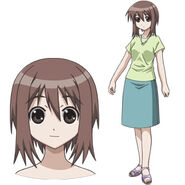 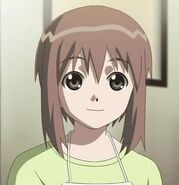 Add a photo to this gallery
Retrieved from "https://mybrideisamermaid.fandom.com/wiki/Nagasumi%27s_Mother?oldid=6049"
Community content is available under CC-BY-SA unless otherwise noted.