Nagasumi's father is a tall, muscular man with short black hair which is similar to Nagasumi's, and has black eyes. He is often seen wearing a solid tan green short with short pants and slippers, also throughout the series he is seen wearing his glasses.

Nagasumi's father is always shown as an object of suffering, due to his wife's dying love for him. Whenever his wife shows her interest in Masa, he is shown in a depressed state, like the time she offers Masa her home cooked meal, he is shown coughing on a burger and then subsequently harangued by his boss to get back to work.

There is one ability Nagasumi's father has a passion for which is his legendary left hook he posseses that is said to be extremely powerful, leaving a terrible mark for days on his victim, showing its power. He reveals this in the first episode when he punches Nagasumi when hearing Sun ask Nagasumi to marry him and he quickly mistakes that Nagasumi was in a sexual relationship with Sun which quickly leads to him punching Nagasumi. But there is a draw back to this punch as stated by Nagasumi's Mother that this can be only used once a day. 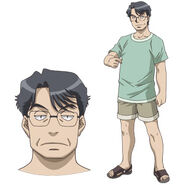 Anime Character Art
Add a photo to this gallery
Retrieved from "https://mybrideisamermaid.fandom.com/wiki/Nagasumi%27s_Father?oldid=6044"
Community content is available under CC-BY-SA unless otherwise noted.