Mawari Zenigata (銭形 巡, Zenigata Mawari?) is the daughter of the chief of police in Nagasumi's hometown, and a childhood friend of Nagasumi, whom she has a crush on.

Her name is related to Zenigata Heiji and "Omawari-san" (a gentle and polite way to say policeman in Japanese).

She takes it upon herself to act as a moderator of social behavior, and often reprimands Nagasumi for some of his actions. Mawari's dream is to become a police chief like her father. Nagasumi say her personality is like Sun which shocks Sun. One thing of interest is that whenever Mawari speaks or does something related to peacekeeping, whistling (like that of a police whistle) can be heard in the background. She also has a trade mark line “Do You Want Mawari to Teach You the Rules of the Society” ("Maybe I should teach you something about the rules of this society!" in the English dub); she says this when people break her rules.

She is referred to as the queen of cards at Isumo elementary school due to her having won two championships at the Isumo elementary school first year student’s card game tournament with Nagasumi as her partner. She is a member of the disciplinary committee and is the leader of the Public Morals Committee/Peacemakers which is a group formed by the girls of Isono Junior High School; the group is Isono Junior High's Police and is the biggest of the three groups, they can take on both Sun and Luner's group at once, they are at war with both Sun and Lunar's personal body guards.

Due to Mawari’s police background she is able to see through the lies that any of her school member make, she often gets close to finding out the fact that Sun is a mermaid but gets stopped by Nagasumi before she does. 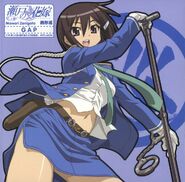 Add a photo to this gallery
Retrieved from "https://mybrideisamermaid.fandom.com/wiki/Mawari_Zenigata?oldid=6039"
Community content is available under CC-BY-SA unless otherwise noted.