"Spiral Shell" Maki (巻, Maki?), despite being only few inches tall, is an assassin working for the Seto Group, as well a devoted friend of Sun.

Maki is a very small merfolk resembling a crab. She has long purple hair and gray eyes. She wears a white robe which is red inside, and ties it up with a red belt. She has short black pants and black shoes with yellow socks. She has a helmet she wears and carries her shell on her back.

She, like Gōzaburō, dislikes the idea of "losing" Sun to Nagasumi, and will often distract Sun with sweet talk in order to fire her shell gun at Nagasumi and try to kill him. She thinks that Nagasumi and Lunar would be a much better match.

She uses a shell to shoot water balls as fast and powerful bullets and has a seemingly unlimited supply of ammunition. She has a fear of cats (ailurophobia), but much to her dismay the cat at the Nagasumi's house has a taken a liking to Maki and is often seen around her when Maki is not with Sun.

She, like many other merfolk, can be seen having seemingly telepathic conversations with others. She even had extensive arguments with Nagasumi in the third episode, yet somehow Sun, who was present for most of them, didn't hear them except for close to the end of the episode.

Despite the fact that she's a Conch, she's a merfolk and she's able to breathe underwater. She is known to be pretty small and uses her conch for protection or killing. 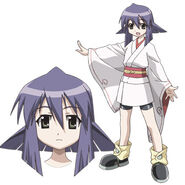 Anime Character Art
Add a photo to this gallery
Retrieved from "https://mybrideisamermaid.fandom.com/wiki/Maki?oldid=6037"
Community content is available under CC-BY-SA unless otherwise noted.