Akeno Shiranui (不知火 明乃 明星, Shiranui Akeno Myōjō) is not only a mermaid but also a "mermaid examiner". She has the responsibility of deporting all the mer-people who fail to qualify as not only resembling humans but also not arousing any suspicion of their true identities.

Akeno is a pale-skinned teenage girl with dark green hair that is tied in a ponytail with square bangs and dark green eyes.

When Akeno was first introduced, she had a hostile attitude towards the other major protagonists. This later changes as she develops feelings of compassion towards them and also as she finds her "duty" as a Knight-in-training as an excuse used by the final antagonist. She is terrified of ghosts and she has feelings for Nagasumi Michishio.

It is eventually revealed that Akeno is the younger sister of Masa, in which she was unaware of until now.

The name Akeno is related to the Shiranui Sea and Venus (明けの明星, ake no myōjyō ?) Venus in the eastern morning sky. 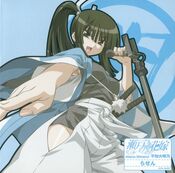 Retrieved from "https://mybrideisamermaid.fandom.com/wiki/Akeno_Shiranui?oldid=6015"
Community content is available under CC-BY-SA unless otherwise noted.